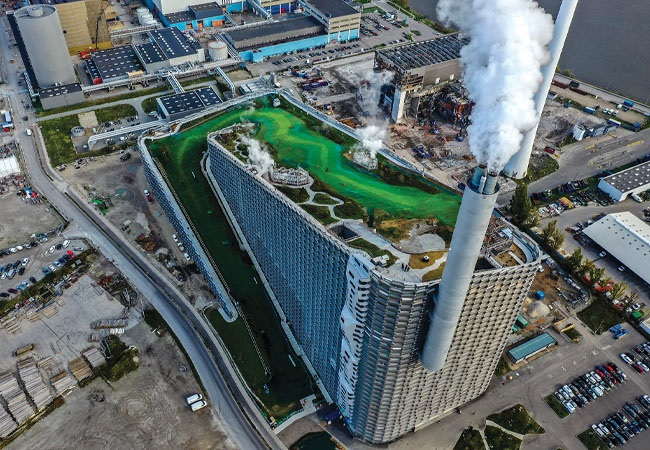 Meanwhile, architect Bjarke Ingels Group has taken biophilia to a new level with its recreation of an alpine scheme on the great sloping roof of the Copenhill waste-to-energy CHP plant. Locals have the option of skiing down an artificial ski slope or hiking forest trails as city trash burns below their feet.

The power plants are a key part of the city’s plan to be net-zero carbon by 2025. They are connected to Greater Copenhagen’s district heating (DH) system, which is the prime means of supplying heating to residents and businesses in Denmark: 64% of households were connected to heat networks in 2019.

While Copenhagen’s new generation of CHP power plants are receiving architectural plaudits (and Kara/Noveren’s waste incinerator in Roskilde can be added to this list), they are only part of its transition to net zero. The integration of less-visible renewables into existing DH networks is also an important element of the 2025 roadmap. These include solar heating, large-scale heat pumps, biogasification of organic waste, geothermal energy, and surplus heat from industry. 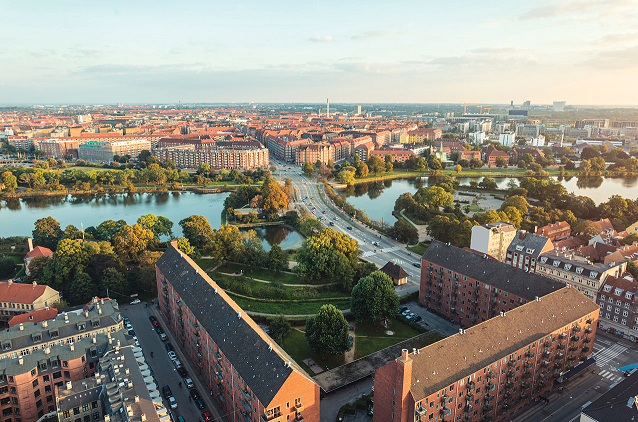 Denmark is also heavily invested in wind turbines and thermal storage facilities that give consumers access to cheap power during periods of high demand. Since 2010, Copenhagen has used seawater to create a district cooling system and the network is still expanding. There is also a drive to replace the fossil fuels used in peak and reserve load boilers in district heating with biofuel, electric boilers and biogas (see panel, ‘Energy sources in Copenhagen’).

Denmark’s heating and cooling industry is attracting global interest, as countries such as Ukraine look to overhaul inefficient DH systems and others, such as the UK, seek best practice in design and installation.

Denmark’s use of district heating stretches back more than 100 years. Its first system was established in 1903, when the municipality of Frederiksberg built an incineration plant to dispose of waste generated by rapid industrialisation. It generated electricity and steam, which was fed, via tunnels, to a hospital, children’s home and poorhouse.

By the 1920s, several towns had built diesel-powered electricity-generating plants, and were using surplus heat in the cooling water for nearby buildings. After World War II, local CHP plants closed, but larger heat stations were built to serve the existing DH systems.

There was a boom in waste incinerators in the 1960s, when the Danes also perfected pre-insulated pipework and started installing leak detectors in the insulation layers. By 1980, 30% of households in Denmark were connected to district heating. The prime source of energy was imported oil and coal, but the global energy crises of the 1970s led to high fuel bills and acute energy shortages. In response, the government devised a strategy to reduce dependence on oil, as well as cut energy demand. There was a drive to insulate buildings and a push to reduce operating temperatures in heat networks. There was also a move to connect local DH systems, to achieve efficiencies of scale and remove outdated plant.

Companies were set up by the municipalities to run the consolidated heating networks. There is now a 180km hot-water transmission system1 in Greater Copenhagen, operated by CTR, VEKS and Vestforbrænding, which runs a large CHP waste incinerator. Owned by local authorities, they supply heat from waste incinerators and CHP plants to 21 distribution networks. Hofor operates a steam system covering 20% of the system; this is being replaced by hot-water district heating. There are 500,00 end users and 9,600GWh of heat is supplied.

VEKS, owned by 11 municipalities, was established in 1984. Since then, the CHP plants connected to its transmission network have been converted from imported oil and coal to natural gas and biomass, and it bought a biomass CHP plant in Køge in 2012.

While baseload is now covered by biomass and surplus heat from waste incineration, VEKS’ managing director, Lars Gullev, sees that changing in the future. ‘There are a lot of discussions around whether biomass is sustainable, but it is the only alternative to make a quick reduction in CO2 emissions. In the long run, there will be other actors.’

One emerging ‘actor’ is large heat pumps, and VEKS is working with CTR and Hofor to take heat from sewage and seawater in Copenhagen Harbour using a heat pump with a capacity of 5MW. Geothermal heat pumps are set to play a big part in the city’s renewable future (see Figure 1 for the increase in the proportion of renewables producing heat in Copenhagen’s DH network).

VEKS is also developing a 70,000m3 pit thermal energy storage (PTES) project with the Høje-Taastrup district heating company.3 Essentially a large, thermally insulated, underground water tank with a floating lid, the PTES serves as an accumulation tank for all the CHP plants in the CTR and VEKS transmission systems. 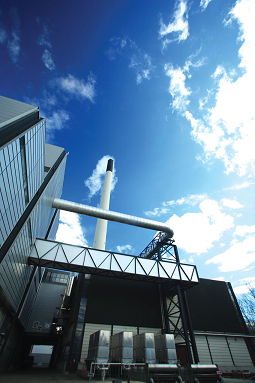 Originally, PTESs were developed for solar thermal storage, such as the 200,000m3 one storing excess heat from a 70,000m2 solar thermal farm in Vojens, Denmark.4  The idea is to use stored heat from PTES when renewables, such as wind and hydropower, are generating a lot of cheap electricity. In that situation, it’s more economical to use heat from PTESs than a CHP engine, because the price obtained for generating electricity is low. When renewable electricity generation falls, CHP plants will be used, because electricity can be sold to the grid at a higher price. The aim is to allow flexible electricity production from CHP plants and peak shaving in large DH systems. The PTES is also around a third of the cost of a steel tank.

VEKS says the upper part of the storage can be fixed at 90°C, high enough to replace steel tanks. Construction work has already started on buildings for pumps and heat exchangers, and completion of the PTES is expected in 2021. Its operation will be optimised by using Balmoral software, which gives an economic optimisation of the electricity and DH market. It has calculated that the PTES will be at its most efficient if it is reloaded 25 times a year.'

The long-term aim is to transfer more heat production to electric sources of power, such as large heat pumps, to take advantage when electricity prices are low. Gullev says VEKS is already using CHP electric boilers, integrated with solar collectors and seasonal storage on the network.

Vestforbrænding runs Denmark’s largest waste incineration plant, burning 550,000 tonnes of waste a year – including 15-20,000 tonnes from the UK – and providing electricity for 80,000 households and heating for 75,000 households. 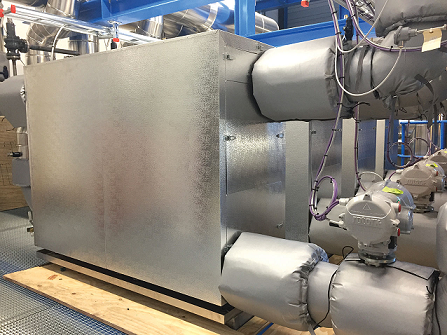 The company collects municipal waste for around 900,000 people and 60,000 businesses. It is able to recycle 58% of the waste, while 41% is incinerated and 1% is landfilled. Of the energy produced by incineration, 20% is electricity and 80% is used for district heating.

It is aiming to reduce residual waste to virtually zero. Fly ash containing heavy metals is currently deposited in mines, but the firm is running a pilot scheme to clean the ash of heavy metals, which can be sold. The remaining ash can be used in cement, while boiler ash can be used for road aggregate.

Vestforbrænding recently connected its district heating system to the Lyngby gas-fired CHP plant, to expand its network into the Technical University of Denmark (DTU) and surrounding developments.2 A heat exchanger station was built, designed by Danish consultancy firm Ramböll, featuring a heat accumulator tank and four lines of Swep brazed plate heat exchangers. The units transfer heat from Vestforbrænding to Lyngby CHP plant for distribution, via the storage tank, into the DTU campus and nearby urban areas. 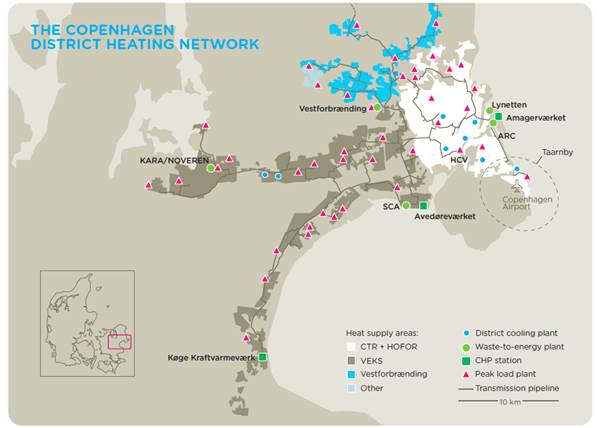 In summer, Vestforbrænding can transfer surplus heat into the accumulator, and in winter – when heat demand is high – the Lyngby gas-fired CHP plant can help Vestforbrænding balance loads.
The installation of the exchanger means that Lyngby can start to phase out the use of gas to generate electricity and district heating, and produce heat from waste incineration instead.

The growing DH networks also capture low-grade heat from industrial processes. For example, the CP Kelco factory, in Lille Skensved, produces pectin from citrus peel, which – when heated with sugar – makes a gelling agent used in food. The process generates a lot of waste heat, so VEKS laid pipework to the factory and installed a heat pump and heat exchanger system. The facility – commissioned in 2018 – now contributes 25% of the heat used in the Køge DH system, at 42,000MWh/year. In addition, the waste by-product from extracting pectin from orange peel is sent to the Solrød biogas plant, opened in 2015. Along with manure, seaweed and medicine waste from CHR Hansen, it helps generate 6 million m3 of methane every year.

VEKS buys the biogas and uses it in a gas engine, which produces 28GWh of hot water for district heating and 25GWh of electricity. The district heating is primarily supplied to the local DH network in Solrød and the VEKS transmission DH network (see diagram below). After the biomass is degassed, it is used as a natural fertiliser for nearby farmers.

These initiatives will be vital if Copenhagen is to achieve its goal of being net-zero carbon by 2025, and district heating will remain an integral part of the city’s energy strategy, extracting heat from Europe’s trash. As Gullev says: ‘District heating is not a dinosaur system; it’s part of the future, because it’s the infrastructure that makes possible integration between the heating system and power demand.’